Photos of Movie Horses Below

Preview--This is the fun stuff made of history and memories, well before we discovered Miniatures, but our beginnings with the horses of our childhood.  Hard to believe it is the same life!  We will tell the story in pictures--as we have time to construct it.  Standby!

Frank Klump, Candy & Peggy's father, was an animal trainer & wrangler for TV and motion pictures . . . who worked with so many greats . . . We only wish that Dad was still with us to help recount the stories himself.  Frank taught countless actors how to stay aboard a horse. One of the most memorable for him was Elvis while filming, Love Me Tender.

Les Hilton:  Mister Ed (he could swish his tail on cue) & Francis the Talking Mule

In the 1950's, Frank, along with colleagues such as Hank Cowl, branched out beyond handling horses for the entertainment industry, to include all manner of farm animals as well as wild North American animals, that you frequently saw in productions from Walt Disney or Lassie, for example.  Frank & Hank handled and trained the Siamese cat in the original, That Darn't Cat. They also handled the loose horse in the field in The Russians are Coming.  Both Candy and Peggy never missed an opportunity to go to work with their father, or Ralph!

Ralph McCutcheon, horse trainer & owner of numerous horse personalities on TV and in motion pictures, including the original Black Beauty who later became Fury, and many, many more . . .  Peggy & Candy grew up riding Ralph's horses.  We lived across the street from his ranch located in the Panorama City/Van Nuys area of the San Fernando Valley.  Ralph was the best man at our parents wedding in 1948.

Rowdy was a bay horse who was often driven in a team (a wheeler, I think). Peg said she always felt safest on a horse and I think that feeling started with that big bay guardian.  If you have seen the picture, Big Country, you have seen Rowdy--running flat out while Chuck Connor's character did tricks on him to torment Gregory Peck's character and impress his lady friend, Carol Baker.  Now, if I could recall which stunt man did the riding. . . Bill Catching, Ben Johnson . . . or?

Peg pursued riding as a serious avocation as a teenager taking English lessons; then dressage lessons from a former German calavryman and the rest is her journey with horses which she will tell, at some point, soon I hope.  Not being the show girl of the family, my path with riding was far less public.  I loved the learning and the beautifully moving horses nevertheless. What will follow are some of my adventures.

Driving trip from CA to Saratoga Springs, New York in 1970 to the American Dressage Institute . . . pictures, too.

LAX in the early 1970's when one of the first batchs of Warmbloods came off the Luftansa jet, including Susan Davidage's second Trahehner stallion, Virgil.

About the photos:  These pictures have been in our family for decades and represent a fraction of the photos that we once had.  Many are snap shots.  Some of them may have come from other sources.  Credit will be noted if known. Photographer, Emerson Hall, often took professional pictures of Ralph's horses.

About the info:  These stories are based upon our collective experience and stories recounted by family members and friends, many described here.  The information is represented to the best of our knowledge. 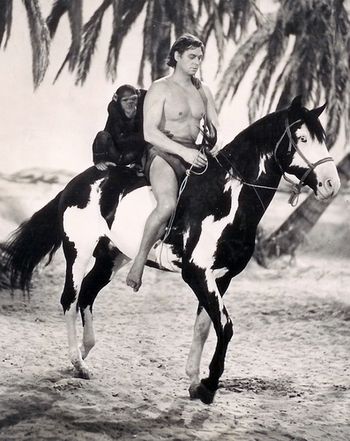 Click upper right of photo for slide show. Until we have time to write the story, how many horses & humans do you recognize? 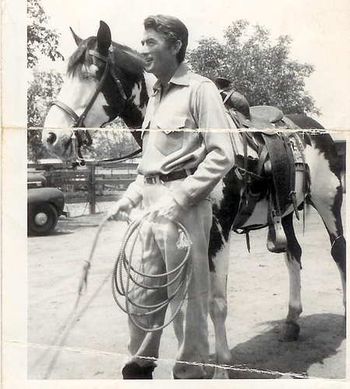 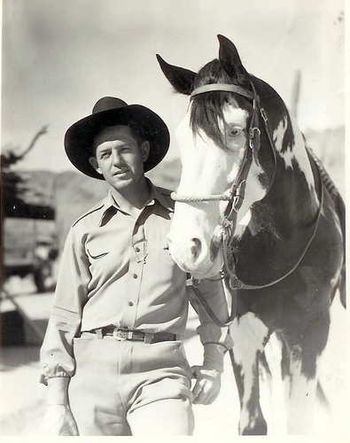 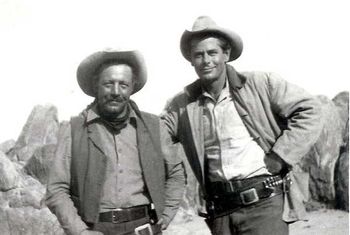 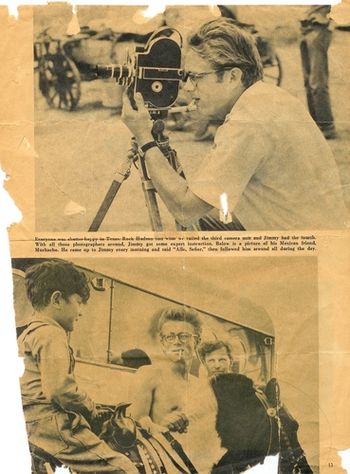 Unknown newspaper or magazine clipping. Bottom: L to R: child actor riding the pony, Little King (no relation to Buckeroo et al), James Dean and Frank Klump, on the set of the movie, The Giant, 1955. Close up in header at top of page. Can you hear The Yellow Rose of Texas playing in the back ground? 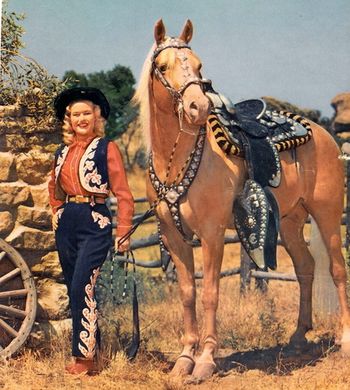 From a calendar. Photo by Emerson Hall? The horse is Ralph's stallion, California, who we always called the most beautiful palomino that we had ever seen as kids. His eyes were the same color as his gleaming coat. He is actually a champagne, not a palomino! Note the Mc on the stirrup of the silver saddle, a McCutcheon trademark. 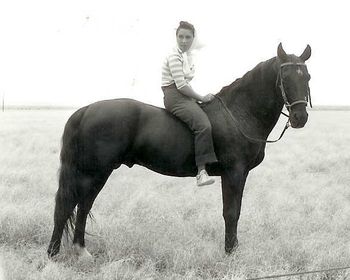 Highland Dale, a registered Saddlebred stallion, aka Black Beauty, Fury, et al. He was known as 'Beaut' to Ralph and all of those us who grew up with him. The lady aboard is . . . Elizabeth Taylor who rode him in The Giant on location in Marfa, TX and also in VA. 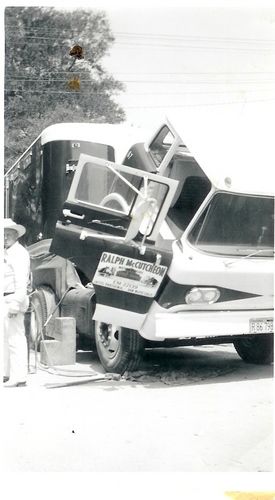 Ralph, supervising the repair of of a semi truck. All of his equipment was painted 'McCutcheon' red, a dark maroon. 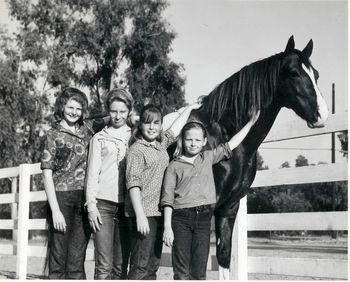 A motely group of horse girls at the end of a hot day helping with a photo shoot. Our reward, a picture! Ugh. L to R: Sheri Fisher Strand (long time friend), Candy, our cousin, Jody, Peggy, and the Saddlebred gelding, Star Raker. Ralph bought him for the National Velvet TV series. But the part went to another horse trainer/wrangler and good friend, Kenny Lee. Emerson Hall photo. 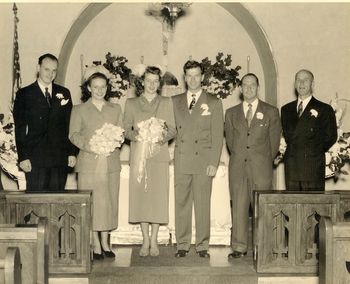